Review + Excerpt: For Better Or For Worse (Wedding Belles #2) by Lauren Layne 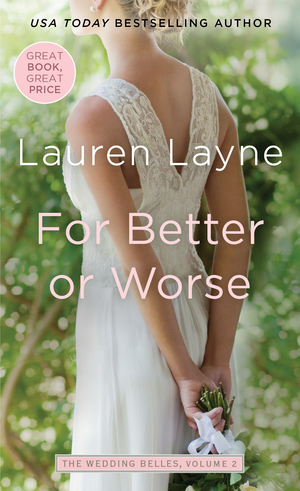 For Better or Worse
The Wedding Belles #2

Will a budding wedding planner and her bad boy neighbor stop banging heads and start hearing wedding bells in the sexy second novel in USA TODAY bestselling author Lauren Layne’s irresistible new series that marries Sex and the City with The Wedding Planner?

When small-town girl Heather Fowler finally gets promoted from assistant to actual wedding planner, she’s determined to make it as one of Manhattan’s elite Wedding Belles. Unfortunately, her first client demands an opulent black-tie affair at the Plaza…in five months’ time. Heather’s days quickly become a flurry of cake tastings, dress-fittings, RSVP cards, and bridal tantrums. But what she’s really losing sleep over is the live music blaring from her playboy neighbor’s apartment all night.

Five years ago, Josh Tanner was an up-and-comer on Wall Street, complete with the penthouse and the migraines. But a grim cancer diagnosis made him realize there is more to life than the corner office. If only he could convince his pretty, workaholic neighbor to let loose, too. As Heather lets down her guard, Josh is surprised when he starts falling for the sweet, vulnerable woman hiding beneath those power suits. Soon, it’s Heather’s turn to convince Josh to take the biggest risk of all: love.

We finally get Heather’s story in For Better or For Worse, and at it is as good as the rest of the Wedding Belles series.

Heather Fowler is an assistant wedding planner, on the verge of becoming a full-fledged wedding planner. Which means she needs to be at her 100% at her job and then some. Dedicating all her time to her job does not leave her with a lot of time on her hands to have fun or to just be. When she finally gets promoted, she is handed an elite client who can make or break her career. To be fully functional, she needs her sleep, but the playboy next door’s ever loud music will not leave her alone.

Josh Tanner was an up and coming Wall Street guy five years ago. But after a death scare caused by cancer, he left his job and turned musician. After all he learnt it the hard way that there’s more to life than a 24/7 job and the perks that come with it. Life is short and needs to be lived to the fullest. It is a difficult lesson that he wants to teach his seemingly hoity-toity neighbour.

Josh and Heather go from unknown neighbours to careful friends and equally careful lovers. Both of them start as friends, but soon they figure out that the chemistry between them is not going away. They give in to the obvious, but keep it clear that neither of them is looking for love or long-lasting relationship. It’s all about the ephemeral fun. Heather does not believe she is meant for love and Josh is not interested in it. So their arrangement is perfect.

I loved the friendship between Josh and Heather. They were really good as friends, especially Josh. He helped her out when Heather was planning a get together for her friends and ends up oversleeping; he takes her home during the festivals so that she doesn’t feel alone.  And for all of this, all he wants in return is… banana cake. Josh’s obsession with banana cake is one of the best and fun parts of the book.

In true LL style, Lauren makes you swoon and gets your heart beating fast. Despite Josh’s past illness, the book is not marred with gloom and a sense of foreboding. On the contrary, it is lively and fun and full of good humour. If a book could be a festival, then For Better Or For Worse would be Christmas, the festival of good deeds, love and joy.

Like any hero in a romance novel, Josh makes his share of stupid decisions. For the most part I loved him, but then there are times when he hurts Heather for no reason and that just makes me wanna shoot him. But then again, that is realistic. No one is perfect. It is indeed a mark of a great author that LL can make you feel varying degrees of multiple emotions for a single character.

Though For Better or Worse is a great book and quite enjoyable, what I am really waiting for is Alexis’s book. I wanna see how she gets together with Logan and then sticks to him. The only complaint I have with this book is that like the first book, To Have and to Hold, this book too had a wedding that didn’t happen. Though everything works out for the good in the end, this one little thing make the book a little predictable. Other than this, the book is just great. Moreover, this book is true to its title. The characters do stay together for the better as well as the worse. I love it when the title of the book ties up to the story. There are times when that doesn’t happen, but when it does, it makes the book that much sweeter to savour.

“So this is where the noise happens, huh?” she asked.

Josh’s eyes narrowed as his friend’s hand touched Heather’s back briefly. “Absolutely,” Trevor said. “We’re sorry it keeps you up though.”

“Donny’s bass, Felix is on drums. Josh is lead guitar, and I, as the most important member, have the pipes.”

“Oh! I thought Josh was the singer,” Heather said with a quick glance over her shoulder at him.

Their eyes locked, and Josh felt a flicker of . . . something.

“Ah, is that what he’s telling the women these days,” Trevor joked.

“Our boy can carry a tune well enough, but wait until you hear me, love,” Trevor said.

Josh turned away in mild disgust, pulling a beer out of the fridge as Trevor and the other guys coaxed Heather into the practice room, thrilled to have any sort of audience, even a reluctant one.

“What,” he called, popping the lid off the bottle and tilting the beer back to his lips as he tried to shake off whatever was bringing down his mood tonight.

“Let’s show Heather here that we’re more than a bit of noise coming through her bedroom wall.”

Josh turned around to see Donny dragging one of his kitchen chairs across the room, disappearing into the practice room.

“All right, love, you just sit down and get comfortable,” Trevor said. “Tanner! Come on, man.”

Josh heard the low strum of Donny’s guitar, heard Felix do a little warm-up rhythm, and knew there was no way of getting out of it. If he refused to play a song now, he’d look like an ass.

Still, his feet didn’t move, and he took another sip of beer.

Feeling eyes on him, he glanced up to see Heather in the doorway, leaning one shoulder against the doorjamb as she studied him.

Her tone was lighthearted, almost slightly reluctant, as though she didn’t want to care about why he was out here alone, feeling oddly itchy with his life.

He appreciated it. He’d spent enough time in the past few years dealing with people who walked on eggshells around him, cooing sweetness. Some of it genuine, some of it not so much.

Heather’s no-nonsense question was refreshing—and exactly what he needed.

He was happy and healthy and living the dream, damn it.

Even if he was no longer sure it was his dream.

“You going soft on me?” he asked, taking one last sip of his beer before setting it aside and strolling toward her.

Heather’s eyes narrowed. “Hardly. I just wanted you to get your shit together so I can see your cute lead singer work his magic.”

He deliberately stepped into the doorway so she couldn’t move in either direction without brushing against him, grinning at her discomfort.

“You’re in a better mood tonight,” he said, his eyes skimming over her crazy curls and relaxed expression. “Why?”

Heather shoved his shoulder with a little scowl. “I’m not!”

“Does that mean you’re going to start making banana bread like Mrs. Calvin?”

“Dare I hope there’s nothing under the apron?” he asked, leaning in slightly.

“Right again!” she said, in mock delight. “I just love to bake naked.”

Josh’s pulse leapt, but Trevor interrupted before the sudden X-rated picture in his mind could turn into a full-fledged fantasy.

“Dude, we doing this or what?”

“One song,” she said, holding up a finger. “I may as well see what the music sounds like on this side of the wall.” 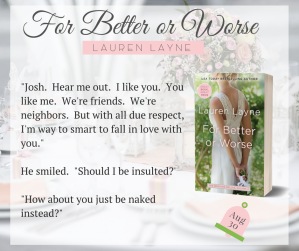 Lauren Layne is the USA Today bestselling author of more than a dozen romantic comedies. She lives in New York City with her husband (who was her high school sweetheart–cute, right?!) and plus-sized Pomeranian.

In 2011, she ditched her corporate career in Seattle to pursue a full-time writing career in Manhattan, and never looked back.

In her ideal world, every stiletto-wearing, Kate Spade wielding woman would carry a Kindle stocked with Lauren Layne books.

One thought on “Review + Excerpt: For Better Or For Worse (Wedding Belles #2) by Lauren Layne”