The drive back didn’t take long. They drove through the streets of Little Italy in downtown San Diego until they reached their final destination: Mitch’s penthouse. 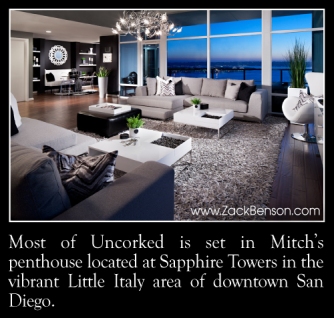 It was stunning. Three hundred and sixty-degree views of the San Diego Bay and even some distant mountains greeted them. The thought crossed her mind that the space had been professionally designed. It was decorated in various shades of grey, black and white, with a pop of lime to add color. The living room was beautiful. It wasn’t too masculine, or feminine. It struck the perfect balance. Beyond the glass walls was a stunning balcony enclosed with glass railings that allowed unobstructed views.

Mitch gave her a quick tour of the master and two guest bedrooms, along with the den and study—all exquisitely decorated—as were the open living and kitchen area.

Soon the music of Yanni filled the air, followed by the scents of garlic and seafood.

“What’s on the menu tonight?” Chella asked, eager to help with the extras that needed to be done in the kitchen.

“Red Snapper in a cheese and garlic sauce, mashed potatoes or white rice, and for dessert, I have a fresh apple pie in the oven.”

“Sounds so good, I can’t wait to dig in. Is there anything you need me to do? I don’t cook much, but I set a great table.”

“Sure. Set up anywhere you’d like to eat. There’s a bottle of Fumé Blanc in the wine chiller. We can have that with dinner.”

“Great. I would have loved to set up on the patio, but I think it’s too cold outside. I’ll set up in the dining room. Just tell me where the dishes and cutlery are.”

“I’ve selected everything. They’re right there behind you on the counter. Go ahead. I’m following you with the goodies.”

Dinner was fantastic. Chella had not enjoyed a meal like that in a long time. Dessert was even better. After clearing the dishes and tidying the kitchen, the two sat on a plush shag rug in front of the big screen TV, partially watching the Bond movie that was on, but mostly talking.

“This is really beautiful. Thanks for having me here.”

“It’s been a pleasure. Thanks for accepting my invitation. Paul and Jason were wrong about you.”

Intrigued by his response, she smiled. “Why? What did they say? I didn’t know they had discussed me with you, or anyone else for that matter.”

“They said you’re a great person, but in all the time they’ve known you, you’re usually solo with maybe two or three exceptions they can remember.”

“That’s true. And exactly when did you have this conversation about me?”

“Truth is, they mentioned you about a week ago. They said they’d introduce us sometime. I just didn’t know it would be under the circumstances we met last night.”

“So tell me—why is a beautiful woman like you usually solo?”

“I’m a little apprehensive about people, especially the opposite sex,” she replied, a little surprised that she was actually able to admit that to him.

“Really? You’re here with me.”

“I figured a friend of Paul and Jason couldn’t be so bad.”

“Is that so?” he replied with a curious smile.

“Who taught you to cook like that? Dinner was amazing.”

“Well, my mom always said that good food was a way to a woman’s heart.”

“Do you cook for lots of women?” Chella said, flashing the type of smile that could allow her to get away with murder.

A few? Yeah, right. “I’m putting you on the spot, aren’t I? I like honesty, no matter how much it might hurt.”

“No, you’re not putting me on the spot. It’s the first in a long time and the first here in San Diego. Let’s just say that I’ve done my fair share of dinners.”

“And women, too.” Wow! We’re getting mighty brave…

“Does that bother you?”

“Not particularly. I guess you wouldn’t be a man if you hadn’t gone through that stage in your life.”

“Do you always have such a high opinion of the male species?” Mitch asked, somewhat sarcastic.

“Not particularly. We just have to take responsibility for the decisions we make as adults, and be honest about it, to ourselves and to the parties involved.”

“Well, can I be honest with you about something?”

She was shocked by his statement. Unable to respond, she looked away, flushed.

Mitch did not give her a chance to respond. Cupping her face in his hands, he kissed her deeply on the lips and pulled her into his arms.

However taken aback Chella might have been, it did not show, for she responded with just as much intensity and passion. She drew him closer. Her hand roamed over his chest and his neck. She felt his awesome body beneath the light sweater he wore. His kisses were sweet and her body ached for more, but her mind would not allow her to continue with what her heart desired.

Fears rushed in. She remembered her past, her ex, Aaron. She couldn’t allow herself to get involved with another man on this level, not even after ten years. She couldn’t subject herself to that sort of pain, not now, not ever.

Aaron was responsible for her not being able to have kids, and she still had the emotional scars to prove it. Letting another man in would open painful wounds, and she just wasn’t ready for that.

Chella pulled away. “This can’t happen. I can’t get involved with you, or anyone. I’m sorry.” She didn’t wait for him to respond but began collecting her things to leave.

“Look, Chella, I’m sorry if I came on too strong. I apologize, but let’s talk about this. Please, let’s not end the night like this.”

“I’m sorry, too, Mitch. I promise you did absolutely nothing wrong, but I must go. We’ll talk another time.”

Flustered, she scrambled out the door, took the elevator down, and caught a cab as she exited the main entrance. Through the taxi’s back window, she saw Mitch run out of the lobby in an effort to stop her but stopped short as he watched her drive away.

He was too late. 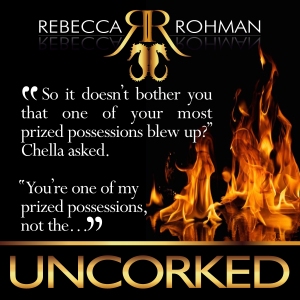 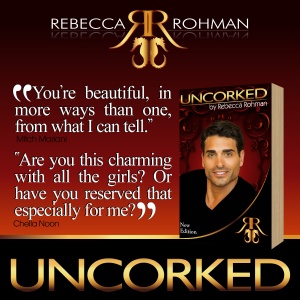 Into The Blue—It’s Not Always Hearts And Flowers…

“What women?” Chella asked after Mitch had put down the phone.

“Chella, it’s nothing you need to worry about.”

“You’re keeping something from me that involve other women, and it’s nothing? I specifically asked you when we started seeing each other if there were any women in your life I needed to be concerned about, and you said no.”

“Then why don’t you enlighten me?”

He sighed, his glare piercing, then stood and brushed past her.

“This is not something I can talk to you about right now.”

“Why? According to you it would complicate things for us, but you don’t want to tell me what it is,” she said, following him into the kitchen.

“It would complicate things for me, not us.”

“You’re smarter than that. Whatever affects you affects me and vice-versa.”

“This involves other people and things I can’t talk about yet.”

“I get it. This trust thing between us is one-sided,” Chella snapped. “I’m supposed to share with you my deepest fears and thoughts, but you get to keep everything to yourself.”

“Really? First, you lie to me about other women in your life, and then you tell me you can’t trust me.”

“I never lied to you about anything.”

“Mitch if things in this relationship are one-sided then what’s the point?”

He stopped what he was doing in the kitchen and walked over to her, placing his hands on her shoulders. “Chella, I’m asking you to please trust me.”

“Mitch, how do you think it makes me feel to know we’re in a relationship and you don’t trust me?”

“I do trust you. This involves very sensitive information about other people, and I have to think carefully about how I handle things first before I say anything. Trust me, please.”

“The last time someone said that to me, we all know how that ended,” she said, pulling away from him.

“Don’t you dare compare me to that psychotic bastard,” he shouted.

“Fine. I guess I have no choice, do I? I’m going to get some work done.” She walked into the guest room and slammed the door behind her.

Onto The Dark Side…

Jade went to her desk and returned with a package. “Tiffany from reception signed for this while we were in our meeting.”

“Thanks,” Chella replied, taking the box from Jade and putting it directly in front of her on her desk.

Chella smiled when she saw the return label from Mitch’s office, the same type of label that had stuck to her rear end that steamy hot afternoon at his office months before. She shook the box gently to see if she’d get a clue as to what was inside.

It’s not jewelry… it’s too heavy.

She tore the tape from the cardboard box. Inside was a gift box, covered in beautiful red fabric. Excited and eager to know what mischief Mitch had been up to, she pulled away the tissue paper covering its contents.

If you’d like to get to know Mitch Mariani some more. Read his and Chella’s story in UNCORKED. A new edition is now available with a fun bonus read at the end. 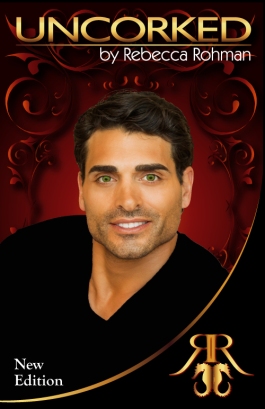 A Contemporary Romance with Elements of Suspense

Chella Noon’s life isn’t her own. Her success as a Marketing Executive in the cosmetic division of an international conglomerate is overshadowed by a series of tragic events from a decade ago. With no family, few trusted friends and years spent on the run, she opens herself up to the possibility of a future with a sexy new real estate investor despite escalating threats from a psychotic ex determined to torment her.

Mitch Mariani never met a deal he couldn’t close. So when Chella walks into his life, he will stop at nothing to prove he is worthy of her trust. But as Chella’s past catches up to them and danger exposes his well-guarded secrets, his heart may not be the only thing at risk of a tragic end.

Rebecca Rohman is a wife and designer currently living in the northeastern United States. She was a sales manager for a tourist magazine, and for many years prior, she was involved in marketing for a jewelry company and fine wine distributor.

About fifteen years ago, she started writing her first romance novel purely to entertain herself. In early 2012, she decided to complete and release, Uncorked. Since then, she has released three additional novels. A Problematic Love is her fourth release.