Review + Excerpt: The Player And The Pixie by Penny Reid and L.H. Cosway

How can someone so smokin’ hot be so bad in bed? I mean, Sean Cassidy is absolute rubbish. RUBBISH. He is the epitome of walking, talking false advertising and I want a refund! Plus he’s an arsehole. So… what is wrong with me that I can’t stop thinking about him?

The Pixie and the Player is a full-length, romantic comedy novel, can be read as a standalone, and is the second book in the Rugby Series.

As the little sister of Ireland’s most infamous rugby player, Lucy can’t seem to escape the championship-sized shadow cast by her big brother, or her mother’s frequent attempts to micromanage her future. Her rainbow hair is as free-spirited as her quest for inner peace, yet overbearing expectations keep bringing her down. And when she’s down, her compulsive little problem lands her in seriously big trouble.

THE PLAYER
Sean Cassidy is a cold-hearted brute… or so he’s been told. Frequently. By everyone.

His blonde locks, baby blues, and rock hard bod make ladies the world over drool with desire. As the rugby world’s second most infamous player, he should be basking in his success. But Sean has never been content settling for second place, and his frequent confrontations with Lucy’s big brother leave him cold. And when he’s cold, his compulsive little problem lands him in the lap of Lucy Fitzpatrick.

THE PLAN
Sean has a problem only Lucy can solve. Lucy has a problem only Sean can fix. The solution seems obvious: you scratch my back, and I’ll bail you out of jail. But when their business arrangement unexpectedly leaves Sean scorching hot and Lucy on the precipice of inner peace, can they convince the world—and Lucy’s big brother in particular—that this is the real deal?

Either way, both the Player and the Pixie are about to teach each other some pretty monumental lessons about family, life, but most importantly, love.

Before starting this review, I must mention that I haven’t completely read The Hooker and the Hermit. I started the book and then left it half-way because I wasn’t really feeling it. That was almost a year ago. In all honesty, I am so glad that I gave The Player and the Pixie a chance. Had I not, I would have missed a gem of a book.

Lucy Fitzpatrick is Ronan’s sister, the hero from The Hooker and the Hermit. She’s had a hard life, especially with and because of her mother. And her mother definitely causes her anxiety which results in, let’s just say not so favorable social behavior. But the moment she is away from the woman who spawned her, she is hunky dory. Going around living her life, helping Annie with her celebrity blog, helping out at an animal shelter and just living the high life, usually in her jammies at home, or following celebrities, clicking their picture, you know the usual deal.

Sean Cassidy a.k.a. Sleazy Sean ak.a the arch-nemesis of Ronan, has been told he is a cold-hearted brute. He knows women only want him because of his social status, definitely not because of his bedroom skills. Sean’s got the looks, but bedroom shenanigans are not his forte. Sean also has the habit of winning. Coming in second place is not acceptable, and that’s exactly what he is to Ronan Fitzpatrick. What better way to get to Ronan than his perky, rainbow-haired sister, Lucy.

Lucy and Sean have chemistry, lots of it. But with Ronan in between, a relationship is not exactly possible. Sean does not care if Ronan finds out, but Lucy feels as if she is betraying her brother. But that doesn’t stop her from approaching Sean or giving him much-needed lessons in the bedroom.

The best thing in this book are the characters. They are far from perfect. They are human and they are flawed and they learn from their mistakes. There was a lot of development to be seen in Sean. From the very first page of the book till the very end, Sean has grown tremendously and for the better. Lucy made him a better man, but Sean also made Lucy a better woman. There was give and take between them.  Both of them were equals in the relationship and I loved that.

This book had loads of fun and entertainment. It also had its share of emotional areas. which just gave some depth and intensity to the book and its characters. On an aside I absolutely loved Eilish, Sean’s cousin. She was a hoot and absolutely adorable. I can’t wait to read her book and learn more about her. 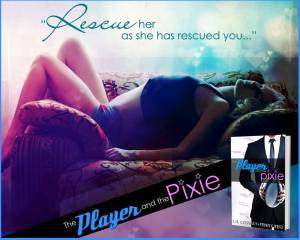 I didn’t know what I was doing.

Requests, things I wanted, words I would never speak or allow myself to think were now uncontainable.

It’s the sex, I reiterated. Again. I’d used this explanation, now on repeat, as a simple justification for the complex cacophony of my mind.

“Be with you?” Her long, dark lashes fluttered, beating like distressed butterfly wings against warming pink cheeks.

I licked my lips, tasting her there. “Yes.”

She stared at me, confused. I was also confused. And oddly frightened.

Because it wasn’t the sex.

Several seconds ticked on as we studied each other in breathless silence. She found her voice before I did. “What does that—”

“Lucy?” Annie’s voice was paired with a soft knock on the bathroom door. “Are you okay?”

I opened my mouth to whisper a clarification to the question Lucy hadn’t quite posed, because I was compelled to tell her it wasn’t the sex. We didn’t have to have sex. We could just . . . talk. Or play cards. Or touch. Or look at each other from across the room.

We could merely be together.

But she covered my mouth with her hand. Her features arrested with unmistakable panic.

“Yes. I’m fine! I just . . . started my period is all. Made a mess in my jeans, like a crime scene.” Lucy hollered in response then grimaced. She immediately mouthed I’m sorry to me. Her cheeks flushed red.

I lifted an eyebrow. She rolled her eyes, ducking her head with obvious embarrassment. I pressed my lips together so I wouldn’t laugh.

Issuing me a quelling look, Lucy released me and skittered out of the stall, whispering, “Stay here and count to three hundred.”

“Oh! Do you need anything?” Annie’s voice was less muffled and I surmised she’d opened the bathroom door.

“Ah, no. Have it all sorted now. Thank God Tom has these nice absorbent napkins instead of those troublesome hand driers. Although I feel like I’m wearing a nappy. They’re bad for the environment, so I should talk to him about replacing the napkins. Maybe make a few available for emergencies . . .”

I released an audible exhale. My heart was beating as though it might leap from my chest. I needed to catch my breath. Neither had anything to do with being caught.

What the fuck were you doing?

It was the sex. She’s phenomenal in bed. You’ve never had that before. It was just sex.

I nodded, reiterating the logic of my justification for the uncharacteristic behavior. If I repeated it enough, perhaps I would believe it.

I didn’t count to three hundred as instructed. I counted to one hundred and twenty-three, then realized what I was doing.

“You’re mad, Sean,” I muttered, shaking myself and promptly leaving the ladies’ room. I checked the cufflinks on my dress shirt—a nervous habit—and strolled back to the table, eyeing the assortment of eejits gathered.

L.H. Cosway has a BA in English Literature and Greek and Roman Civilisation, and an MA in Postcolonial Literature. She lives in Dublin city. Her inspiration to write comes from music. Her favorite things in life include writing stories, vintage clothing, dark cabaret music, food, musical comedy, and of course, books.

She thinks that imperfect people are the most interesting kind. They tell the best stories.

SEX! It all started with sex, between my parents. Personally I don’t like thinking about it, but whatever works for you is a-ok with me. No judgment. The sex happened in California and much of my life also occurred in that state until I moved from the land of nuts (almonds), wine, silicon… boobs, and heavy traffic to the southeast US. Like most writers I like to write, but let’s get back to sex. Eventually I married and gave birth to 2 small people-children (boy-6, girl-4 as of this writing).

By day I’m a biomedical researcher with focus on rare diseases. By night I’m a knitter, sewer, lino block carver, fabric printer, soap maker, and general crafter. By the wee hours of the morning or when I’m intoxicated I love to listen to the voices in my head and let them tell me stories. I hope you enjoy their stories.