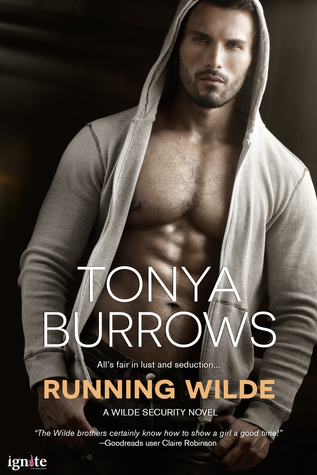 I got a copy of this book from the author and publisher in exchange of an honest review.

Let me tell you, when you start a Tonya Burrows series, don’t ever think that the first book is the best or the second or the third is the best. Because this woman writes nothing but the best. Each book in the series is better than the previous one. And that holds true for Running Wilde too. Vaughn may just be my favorite Wilde brother, but I have a feeling Tonya is going to change that with the eldest Wilde brother, Greer (don’t tell Reece. He still believes he is my favorite. Don’t worry Reece, I still love you).

The protagonists of this novel, Vaughn Wilde and Lark Warren are characters we have met already. Vaughn being part of the ever-naughty twin duo Cam-Vaughn and Lark as Libby’s best friend in Wilde For Her. In Wilde for Her, Lark and Vaughn hook up and have a short-lived, intense relationship before Lark disappears. This book starts with Vaughn finding her.

While Vaughn and Lark’s story starts in Wilde For Her, there is enough back story in Running Wilde that one can read it as a stand-alone. But to exploit the book to its optimum, it’s better to read the whole series. There are certain nuances that you miss out on otherwise.

Vaughn Wilde has been looking for Lark Warren for months now. After an explosion nearly killed him, Lark disappeared. While they had a good thing going, Vaughn can’t figure out why she would leave without any news. But as he starts to search for her, he realizes that there is a lot more of Lark than a hot body and a sarcastic sense of humor. That woman has secrets a mile long.

Lark Warren has been running for five years. Every few months, she picks a new place and a new name. The horrors of her past can’t be farther enough. She never stays in one place for too long, never forms any everlasting relationships. After all it’s only going to hurt once she leaves without a word. And she always leaves. Except with Vaughn Wilde, she forgets her rules and falls head over heels in lust and maybe even a little bit in love with him. But the moment she thinks, she can be happy, her fears and her past drive her away from him.

Vaughn is determined to find Lark and surrender her to the authorities for identity theft. Except he can’t forget the three amazing weeks he spent with her before her disappearance. Not to the mention the ever-present palpable chemistry between them.  But Vaughn has also brought with him the very people Lark is running from. She is determined to run away, he is determined to keep her close.

There was nothing predictable about this book. Which is one of the things that I love about Tonya Burrows. Till the end I couldn’t figure out who Lark was or what her past was like. But it unravels slowly and steadily through the novel. Lark and Vaughn had a love-hate relationship going with  sarcastic banter thrown in. I just loved it. Vaughn and Lark and right up there with Shelby and Reece as my favorite couples. They had great chemistry and their back and forth was too much fun.

I really felt for both Lark and Vaughn. Lark’s past really was a horrible one and I could understand why she did what she did. But I did get a little annoyed when she just plain refused to trust Vaughn and share her problems with him. No matter how understanding Vaughn was. That man went all out for her. He would have given her the world and then some. There was such passion and longing inside Vaughn. He may have had a hard exterior, but the man was just a sweet little teddy bear. He really was a sweetheart. He is the kind of man who would have carved his heart out for the woman he loves. After the first time, I really felt like Lark didn’t deserve him, but she redeemed herself in the end.

Tonya being the sneaky woman that she is, also threw into the mix our very own Marc D’Angelo from the HORNET series. We find out something totally unexpected about him. So listen up HORNET readers, make sure you pick up Running Wilde, or else you might just miss Marc’s secret.

Of course, Tonya being Tonya left us in suspense about Greer. I can’t wait to read about him. I have a feeling he is going to trump all the Wilde brothers to become my ultimate favorite. Hurry up Tonya!! I’m waiting.

Other books in the Wilde Security series: