ARC Review + Guest Post: The Beauty and the Bachelor by Naima Simone 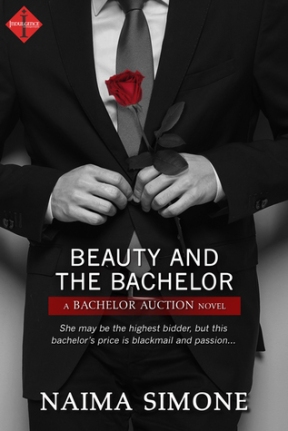 I’d like to thank Entangled Publishing for an early review copy of this book.

Lucas Oliver is all set to avenge his father. And he will do whatever it takes to get what he wants. Even if it involves blackmailing the innocent daughter of his sworn enemy into marrying him. All her life Sydney Blake was controlled by her family. She was nothing more than a disappointment to her fickle, indifferent mother and her driven, controlling and absent father. She was a mere pawn in her father’s games. The only good thing she did to please her parents was agreeing to marry the son of her father’s business associate. And even that appreciation is short-lived, when she decides to give in to Lucas’s blackmail and marry him to save her father.

At first when I saw that the people around Sydney, including her family was treating her like garbage, I was enraged. Not just at her family, but also Sydney herself. What person just stands and looks around while they are being beaten to an inch of their lives. But as I kept reading, I realized, Sydney is far stronger than she looks. She has the kind of inner strength that inspires. The kind of strength one can’t guess just by looking at her. Her actions are mainly driven by the guilt of an old tragedy, a tragedy even her father blamed her for. But the growth you see in Sydney with each passing page is commendable.

Lucas Oliver. I have mixed feelings about the guy. When I first finished this book, I was leaning towards the ‘I-hate-him’ tip of the scale. But now that I have had some time to think and process the book, I am more in the middle. The best thing I loved about Lucas was that he is the reason Sydney found herself. He encouraged her, made her feel special, made her more confident. I think without Lucas, Sydney wouldn’t have grown as much as she did in this book. He made her more independent and strong enough to stand up for herself.

Now as much as I loved Lucas for all the good he did to Sydney, I hated all the bad he did to her too. He was always clear about his agenda. Revenge. No matter what the cost. And that’s what he does till almost the end of the book. More times than not, Sydney had to pay for her father’s sins in some way or the other. He may not have physically hurt her, but he hurt her plenty emotionally. At every stage of their relationship he kept secrets, his actions would say something and his words something else. Like Sydney, I too was frustrated with his back and forth. And when he accuses her of doing something she wouldn’t dream of, all bets are off.

Lucas does come to his senses and realizes what an ass he was for treating Sydney the way he did. And he does promise to keep her happy and love her for the rest of his life. But I would have loved to see some more grovelling on his part.

What was irrefutable was Lucas and Sydney’s chemistry. Oh boy did they have chemistry. Oozing hot was what they were. Since the moment their eyes met across the stage, they were sizzling. The sex was hot and even when they were angry with each bother they were burning up the pages. Their attraction to each other through all the ups and downs was so palpable, it was undeniable. Their kind of passion is one of the reasons that I think their relationship made it.

The only secondary character I liked was Aiden, Lucas’s best friend. He was a fun guy who could clearly see that what Lucas was doing was not right. He tried to talk him out of it too. And when Lucas inevitably messes up his relationship with Sydney, it’s Aiden who gives him the much-needed kick in the ass. Tyler, Sydney’s ex-fiance too was a guy that I really liked. As we find out in the book, he has his own mess to clean up and I can’t wait to read more about him. I hope Naima Simone decides to write his story, because that’s one that I definitely want to read.

The people I hated most in this book were Sydney’s parents. There are no two parents worse than Jason and Charlene Blake. The way they chipped at their daughter was just despicable. They reminded me of vultures picking at a carrion. I am really surprised though that Sydney turned out the way she did with the kind of parents she had. But I guess, when you have the worst kind of parents, you are determined to be the best kind of person. And Sydney was definitely the best kind of person. Though Jason too realizes his mistakes and apologizes to Sydney, for e it was too little, too late. Twenty years of indifference and hurtful attitude can’t be overcome by one apology. But Jason was still better than Charlene, because that woman never even bothers to apologize to her daughter for all the agony she has caused.

Overall it was a really good book with an emotional roller coaster ride and an amazing lead heroine. Sydney is the kind of woman one would like to emulate. Her innate goodness, her strength, her kindness and courage are the best part of her. I have a total girl-crush on her, because let’s be honest, she may not wield a sword, but she is totally bad-ass.

Naima Simone graciously consented to doing a guest post for my blog even though she has a busy schedule. Read on to find out why exactly she calls herself a hopeless romantic.

I am a hopeless romantic.

Well, let me qualify that. I am a hopeless romantic when it comes to works of fiction. Real life? Umm…not so much. My husband is over my shoulder reading this and nodding like his neck is broken… What can I say? Flowers, soft music, candlelight—all lost on me. One’s going to die in a couple of days, the other is annoying and depressing, and why bother with hot, melting wax when there’s electricity? Notice I didn’t mention dinner, ‘cause if I ever pass up a good, hot meal, just mount me on a burning raft and sail me off into the wide ocean blue, Viking style!

But all my decidedly meh romantic tendencies aside, I am a romantic through and through when it comes to books and movies. Happily-ever-afters are my weaknesses. Don’t get me wrong. I love a good testosterone-riddled-who-needs-a-plot flick just like the next girl, er, person (was that sexist?), but there’s something about watching two people with emotional wounds and bruises find healing, joy and love that is pure catnip for me. Whether it’s a misunderstood bad boy who falls for the proper good girl. Or it’s the brooding hermit who lost everything and everyone important to him but finds home again in the spirited woman who refuses to let him live an empty life alone. Or it’s the mysterious millionaire who seems to have everything but is truly seething with hatred and bitterness and ends up discovering peace, redemption and love in the unlikeliest and most unexpected woman. Oh. *blink. blink.* Was that a shameless plug? J

So, while thinking about my blog, I started thinking about the most romantic movies I’ve seen. This was a tough list to narrow down, and I’m sure after the blog is posted, I’m going to be smacking my forehead, like, Daaaang! How could I forget so-and-so? But here’s my list:

So there’s my list! And why I’m such a hopeless romantic. After reading this list, I’m sure some of you are agreeing with the “hopeless” part… *snicker*

Don’t worry Naima, I’m right there with you being a hopeless romantic. And I totally agree with the “hopeless” part. Thanks so much for doing this guest post for me!

4 thoughts on “ARC Review + Guest Post: The Beauty and the Bachelor by Naima Simone”