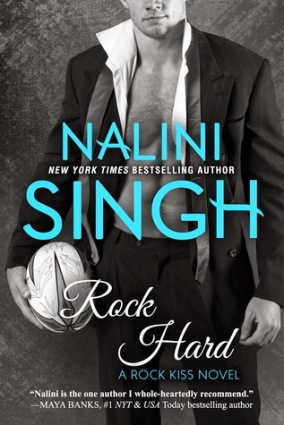 I received a copy of this book from Netgalley in exchange of an honest review.

I’ve been looking forward to Charlie and T-Rex’s story since I read Rock Addiction. We already got a hint as to how Charlie and Gabriel’s relationship would be in that book. And boy, oh boy did I love it? Heck yeah. Rock Hard is my favorite book in the series. Rock Hard tells the sweet, shy and invisible mouse, Charlotte Baird and a hot, strong, T-Rex of a man, Gabriel Bishop.

Charlie’s previous relationship was an abusive one. And she didn’t get out unscathed. Since her relationship with Richard ended, she has been living in a perpetual state of fear and apprehension, still plagued by the nightmares of that horrendous relationship. She was never an outgoing person to begin with, but after what Richard did to her, she just closed in on herself. The only person who knows who Charlotte really is, is her best friend Molly. But when her new boss, Gabriel Bishop pushes her far enough, she realises that she too has the strength to fight back.

Gabriel Bishop is a successful business man, and he was a successful rugby player. His kind of success doesn’t come without a lot of determination and a spine of steel. The man knows what he wants and how to get it. When he meets a closed off, shy, buttoned up Charlotte, he is tempted to break down her walls and reveal the beautiful woman beneath.

Now Gabriel Bishop is the kind of alpha male that I love. He never pushed too hard, just hard enough. I loved the way he coaxed Charlie out from her shell. It takes her a while, but she comes out on the other side, stronger. Gabriel always knew that Charlie was hiding a painful past, but he never coddled her. He never tried to patronized her. He treated her as his equal, like the strong woman that he knew she was.

Charlie has never been one to pick up a fight, but her boss drives her to almost committing murder. His murder. She just can’t understand why the man keeps pushing all her buttons, and she definitely can’t understand why he is so interested in her. After all T-Rex is a rugby god, a superstar with hoards of female fans, a successful businessman and hot to boot. So what does he see in a mouse like Charlie? The answer was quite simple. Gabriel saw beneath the protective layers of her. He saw the smart, sexy, talented yet vulnerable woman. And all he wanted was to protect her and have her. To call her his.

Unlike Rock Addiction, Rock Hard did not have a sex scene in every second chapter. I enjoyed the way Gabriel peeled off Charlie’s layers and showed us the woman beneath. It’s only when they both had established unwavering trust in each other, that they decided to consummate their relationship. It was a nice change of pace. The minimal sex scenes and abundance of emotions worked very well for me. Another thing I loved in this book was the smartly crafted, funny titles for all the chapter. Those itself were enough to bring a smile to my face.

Rock Hard was the prefect mix of good, strong characters, well-put together story-line and great writing. I look forward to going back to the boys of The Schoolboy Choir.