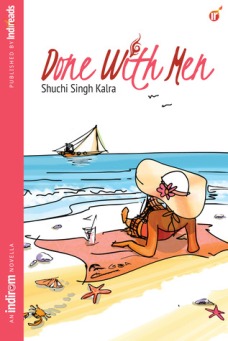 I got a copy of this book from Indie Reads

Kairavi Krishna. a travel journalist has had it with men. They aren’t worth it anymore. After breaking up with her latest boyfriend, she is ready to call it quits with the dating game. All she needs now is her best friend Baani, a trip to Goa and some vodka. While in Goa, when Kay sees her ex painting the down red, with his hot new girlfriend, she just wants to get out. Even if it means she has to make out with a woman to do so. After all she is done with men, right? But an accidental fall from her balcony leads her right to Dr. Vivian D’Mello. So, will Kay fall off her ‘no-more-men’ wagon with the entry of the hot and sexy doc.

Kay, I thought was quite easy to jump into relationships. Even though she had sworn off men, right after she meet Vivian, she starts contemplating a relationship with him. She doesn’t know him very well, he hasn’t made any promises to him, but she acts as if he has. Like her friend Baani says, Kay is more in love with the idea of love rather than being in love. She is quite fickle-minded. One moment she is upset about the possible engagement of Vivian, and in the next she is still reeling from her break-up with Ricky. If she is not completely over Ricky, she has no business jumping into another relationship.

Kay has know Vivian for all of a week and she is bursting with love for him. The main reason I didn’t like this was because I am anti-insta-love. In this one week Kay has shown a myriad of emotions towards Vivian, from jealousy to possessiveness to unconditional love. I had a hard time believing those emotions. For a woman who has been flitting from one relationship to another, it’s hard for me to believe she would stick with Vivian. I also thought that Kay was a little naive at times. She cuddled with Vivian once, and she starts thinking that they are definitely a couple. Cuddling doesn’t a couple make, Kay!

Kay had the habit of referring to her thoughts via the ‘Thought Bubble’. Though initially it was fun and interesting, it soon got irritating.

In the recent years, I haven’t read many books by Indian authors, but I decided to make an exception for Shuchi Singh Kalra. And I don’t regret it. In India, the subject of bi-sexuality is pretty much a taboo, so when Ms. Kalra tackled with it even though in passing, I enjoyed it. Done With Men was a fun, entertaining, enjoyable book. It was an easy read that makes you laugh. It has it’s low points, but I can’t deny that the book was fun to read.