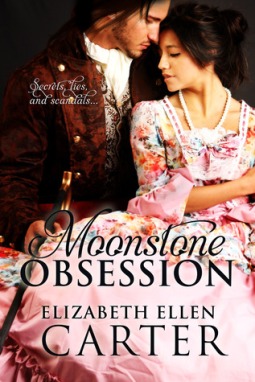 Moonstone Obsession is an amazing book. It reminded me of the 18th century novels I used to study in my graduation and that IMO is high praise. This book had a romantic story, the political and societal aspects of the time and it was pretty well written.

Selena Rosewell has given up on love. She hasn’t had her debut in her society at 21, as she was busy taking care of her sick father and running the household. There’s not much time to socialize. After her father’s death she is living with her brother and his family and helping her pregnant sister-in-law run the household and take care of the children.

When Selena ends up at a ball with her brother to help further his merchant fleet business, she meets Sir James Mitchell, Lord of Penventen. There is a mutual attraction between them that has Selena wishing for a kind of relationship she never thought she could have. Dreams she never dreamt because she thought they couldn’t come true.

James Mitchell is taken by Selena from the first moment he sees her. She is beautiful, intelligent, smart and a strong independent woman. He is intrigued by her, but his life is not an easy one. James doesn’t know what is more dangerous; being a spy or being considered a husband material by the women of the ton. He knows he is attracted to Selena and would like to make a move. But his Lady Abigail, lady-in-waiting to the Princess Royale is determined to keep James to herself. She is willing to go to any extent to get James, even blackmail.

In this world of scandal, blackmail, deceit and friendships of convenience, Selena has to stand strong and fight for what she wants. She has a champion in Lady Margaret, James’ grandmother.

Moonstone Obsession is an intricately woven tale of history and romance. The real and fiction are fused so perfectly. Elizabeth E. Carter has managed to incorporate the societal and political happenings of the time with the fictitious romance. The world of the spies, the behaviour of the high society people, everything is a testament to the time period it is set in.

One of the best things about this book was how Ms. Carter used Selena’s skills to help solve James’ problems. Her knowledge of French and the sea was put to good use. She was not a damsel in distress. She was a strong, independent woman who could go head to toe with any man when necessary.

The characters are compelling and interesting. They seem very human rather than perfectly made up statues. The story was well written and even though we could suspect the ones behind all the troubles, the story did not lose its intrigue. There were some revelations though which came as a surprise.Moonstone Obsession was well thought out and well researched. I was pretty much invested in the story from the start till the end and I couldn’t help but want more.

I am very impressed by Ms. Carter’s writing style and her well thought out story line. I look forward to reading more of her works.

← A Penny For Your Thoughts #1: Fifty Shades Trilogy
ARC Review: The Trouble With Love by Lauren Layne →