This year I’m participating in the Fairytale Challenge hosted by The Daily Prophecy and I’m starting off with a re-read of one of my favorite fairy tale retellings. 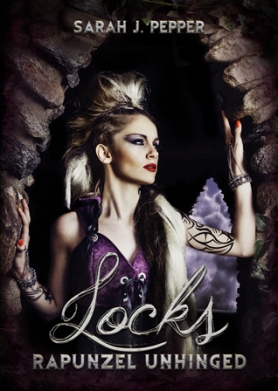 Locks is my first Rapunzel re-telling. I’ve yet to find another one. And this one was amazing. It completely took me by surprise and I am still in a daze. Pepper’s Zel is far from the damsel in distress of the original story. She is independent, she is crazy and she can kick your ass. She knows her strengths and weakness and works on them. She isn’t afraid to accept something she doesn’t know. And more importantly, she is willing to learn. She is not waiting around for her Prince Charming to come around and rescue her.

My White knight may as well have been a pimp, and my Happy Ending played out like a bad movie. However, I wasn’t the type of girl who played the Dumbstruck Damsel. No I’d grab life by the balls and find my own happiness… and I’d do it in a fabulous pair of heels.

Flynn is pretty much like a bad boy biker dude in his leather jacket and the devil-may-care attitude. He is far from a good guy and he makes no excuses for it. That’s not to say that he isn’t human. He has his flaws and they are an accepted part of his character. He is strong-willed and he knows what he wants, and he is willing to do anything to achieve his goals. All the characters in this novel were well fleshed out, including the secondary characters. They were part of the rebellion against Taryn, the evil sorceress, and they provided a much-needed respite as well as a glance into the inner workings of the sorceress and her captives. Taryn is the character you’d love to hate. She is complicated and has been well expounded by Pepper. Her evilness knows no bounds and you actually feel like physically hurting her. I am amazed at how easily pepper manages to write about characters readers can connect with. You love them, you hate them, but you sure as hell can’t ignore them. All the twists and turns in the book only makes you want more of it. Locks keeps you on your toes and leaves you wanting more. Locks was a unique take on Rapunzel where instead of the damsel we find a feisty fire-cracker and instead of the Prince Charming, we find a belligerent know-it-all. Yet Pepper has managed to retain the essence of the original fairy tale. Zel and Flynn have been perfectly described in the following quote:

I wasn’t the ideal damsel who needed to be rescued. I spoke my mind when it was better to keep my lips sealed. My skin was inked; I wore dark makeup, stiletto heels and short skirts. My hair was forever getting in my face, and I behaved poorly at prestigious venues. I definitely wasn’t the stereotypical bring home to meet the parents type of girl. But, if a guy wanted a girl who gave it to him straight, I was it, both good and bad. Flynn wasn’t the classical hero either. Granted, he was sexy as hell, but his personality was an acquired taste. He was merciless but righteous when need be. Nevertheless, when it came right down to it, he loved me unconditionally and showed me how to do the same. Thank God, because I had so many flaws, and he wasn’t always so charming.