Book Review: Burn For Me by Ilona Andrews

The best-selling writer duo Ilona Andrews have done it again. They have once again managed to create a magically real world, with equally real and flawed characters and knock you off your butts. Ilona Andrews have once again re-created their magic in their latest opus. I am ashamed to say that when I first started reading this book, I started comparing Nevada and Rogan to Kate and Curran. But soon I realized how unfair that was. Sure they might have a few similarities, but essentially they are very different individuals. That’s not to say that Nevada and Rogan are any less. They are equally great characters.

Nevada Baylor, a private investigator, just got handed the toughest case of her life. Sure it was under the threat of losing everything and ending up on the streets, but still it is the toughest case she ever handled. Handling a Prime, the zenith of magic user, pyrokinetic gone loco is no walk in the park, especially when said guy flirts with you shamelessly and then goes on to torch your house. If going on a suicide mission to save her home and family is not enough, she gets kidnapped by Connor ‘Mad’ Rogan. A devilishly handsome; emphasis on the ‘devil’ part; magic user, a billionaire and a Prime.

Mad Rogan is on a quest to find his nephew who helped Adam Pierce torch a bank. And Nevada is his best bet to find Adam. He is willing to go to any extent to get what he wants. Even kidnap, bind or torture. He really is Mad and makes no excuses for it. Though if you ask me he a closet teddy bear, who doesn’t want to show the world his good side. Together Nevada and Rogan embark on an expedition to stop Adam from destroying Houston.

I love how Nevada compared Rogan to a dragon. Wild and unpredictable. Dangerous.

“How about you don’t kill anybody for a little bit?”
“I can’t make that promise.”
Small talk with the dragon. How are you? Eaten any adventurers lately? Sure, just had one this morning. Look, I still got his femur stuck in my teeth. Is that upsetting to you?”

Nevada and Rogan’s chemistry is off the charts and has you holding on to your chairs. The sexual tension between them is so palpable you can cut it with a knife. They are complete opposites and that’s precisely why I think they are a fantabulous match. While Nevada can humanize the desensitized man, Rogan too can help Nevada with her unexploited and unexplored powers.

I loved almost all the characters. Even Adam Pierce. He was like a teenager in a man’s body. Always looking for acceptance and adoration and always wary of rejection. In simple terms, he is a spoilt brat.

“Able to conjure fire that can melt solid steel, Adam grew up in a lap of luxury, the youngest son and progeny of  distinguished House Pierce.”
Vain to the core, Adam believes he is God’s gift to women. Nevada describes him quite accurately:
“Vain. Terminal fear of T-shirts or any other garment that would cover his pectorals.
Deadly. Doesn’t hesitate to kill. Holding him at gunpoint would result in me being barbecued. Whee.
Likes burning things. Now here’s an understatement. Good information to have, but not useful for finding him.
Antigovernment. Neither here nor there.
Hmm. So far my best plan would be to build a mountain of gasoline cans and explosives, stick a Property of US Government sign on it, and throw a T-shirt over Pierce’s head when he showed up to explode it. Yes, this would totally work.”

I especially loved Nevada’s Grandma Frida. She was a total hoot. That woman was so full of life and energy. A friend and confidant to Nevada and the rest of her brothers and sisters. Her cousin Bern was an enjoyable character too. Nevada’s whole family actually were a mixture of so many kinds of people. From her pragmatic mother to her drama queen sisters.

Ilona Andrews have once again managed to create a unique world that combines both imagination and reality. I absolutely loved the way Andrews have reproduced the caste system in this book. The magic users are divided into different classes starting from Primes, which is the highest and the most powerful rank to Minor, the least powerful rank. The other ranks include Average, Notable and Significant in ascending order. Ilona Andrews have also included our modern social media like ‘tumblr’ and ‘twitter’ into their book. How helpful social media can be when you are out looking for information. As usual the Andrews duo has poised us with well fleshed out characters and an elaborate world building.

I must admit I was a bit hesitant after seeing the cheesy cover. I really didn’t want Ilona Andrews to be a one time wonder for me. But fortunately for me, my fears were without cause. A brilliantly written book that will take you on a roller-coaster ride. There is no full stop or a lull in this book. Things keep happening one after the other. In true Ilona Andrews fashion there was a fun, sexy and enjoyable banter between the protagonists. I also appreciated the fact that they gave some prominence to the romance aspect too. The epilogue written in Rogan’s POV gave an insight into his feelings for Nevada and what we can expect in the future.

Finding out who was behind the whole fiasco of destroying the city was rather confounding. I never predicted or expected it would end the way it did. I’m largely interested in Nevada and her powers; because throughout this book it is quite clear she has some untapped potential. I’m eager to know how she grows into her powers and how she deals with the subsequent consequences.

Nothing about this book was predictable no matter how hard I tried. There was nothing disappointing in this book either. Not. One. Thing. It is smartly written, it is engaging, it invokes some powerful feelings and it is a case of sheer brilliance on the part of Ilona Andrews. This book directly made it to my Oh-My-God-This-Is-So-Amazing-What-Just –Happened list. No one other than a virtuoso could have done justice to this story. 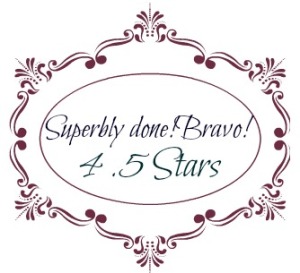